This morning I couldn’t stand sitting around in my apartment with my kids anymore so I decided to bike to my temporary office at NYU. Going through riverside park I immediately found my way blocked by this tree 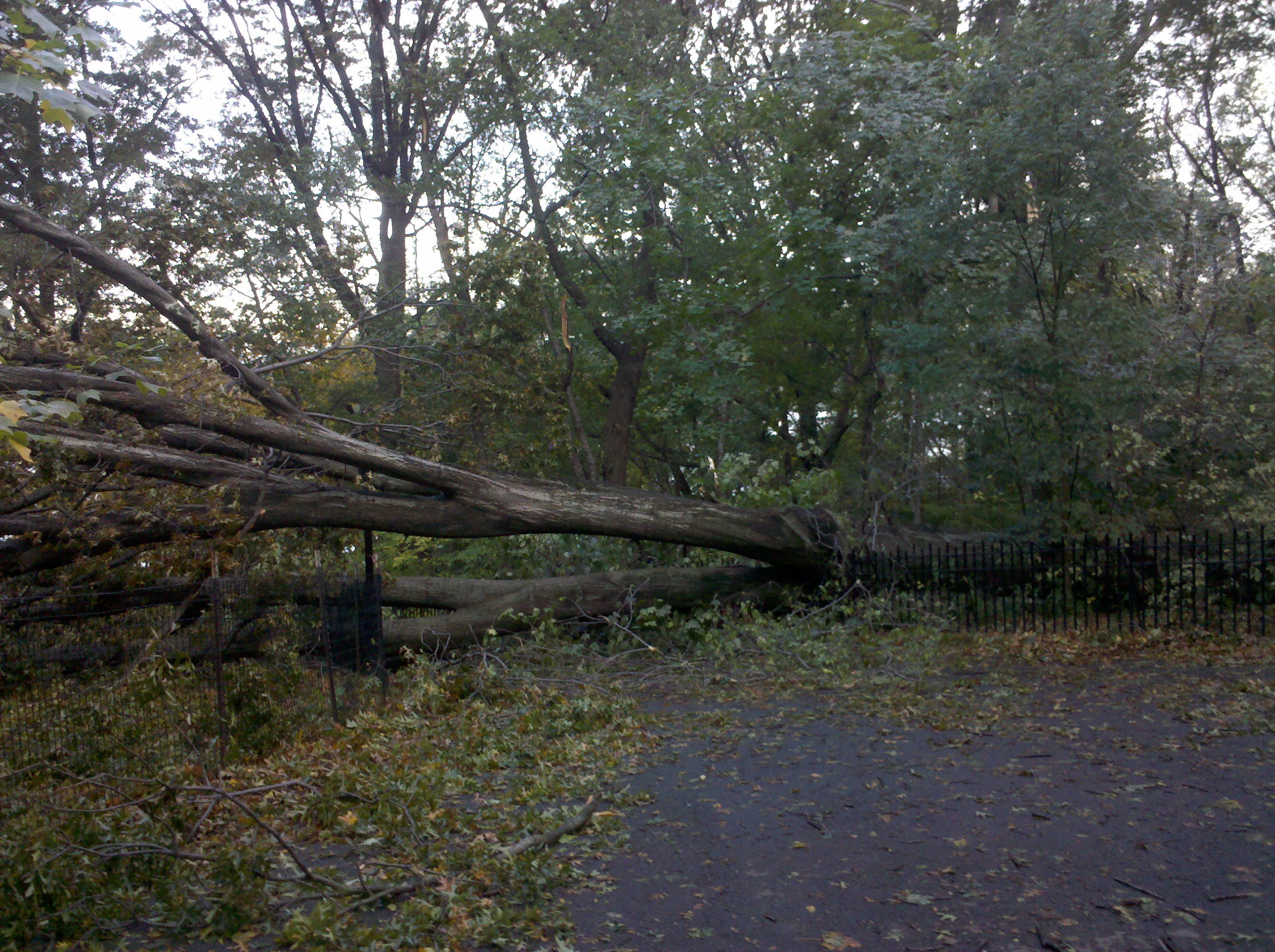 A little further down the west-side bike path a police officer forced me to turn around and take to the streets. On the way out of the park I see another big tree down. It certainly would have made sense to keep bikers out of riverside park during the storm, but at this point in time it makes no sense at all. I continue up west-end in the middle of a huge traffic jam having to avoid cars jockeying for position and switching lanes. Then somewhere after 38th Street the traffic thins out. There is a police officer directing traffic at an intersection having working traffic lights, and then the next and all further traffic lights are out. Biking further I observe a couple of little black vans with sirens and lights on race through the traffic.

Nearer NYU I see people desperately flagging down cabs and I wonder if maybe I could make some money offering rides on my bike. But I guess it would only work with dutch people who know how to sit on the back of a bike. Anyway, arriving at Courant it turns out the building has its own power plant and everything is working! Water, electricity and most importantly the internet. Great, now I can write those recommendation letters I was trying to procrastinate about!

This post is a followup on this series of posts. Basically, I in some sense forgot the punchline of the whole story and just now it came back to me.

Let’s consider the case of the Quot functor for example. First let’s consider it in a reasonable level of generality: assume we have a proper morphism X —> S with S Noetherian and a coherent O_X-module F flat over S. Then given a Noetherian S-algebra A and a short exact sequence

functorially in the A-module M and agreeing with boundary maps. What is important here is that you only need to have this for low cohomology groups.

Firstly, if the guess is true, then we get what we want by just taking K to be a stupid truncation of P!

Secondly, if X —> S is projective, then the guess is correct. Namely, in this case you can find a resolution

of E where each E_i is a finite direct sum O_X(-n) where n ≫ 0. Then the complex

works because each of the flat sheaves Hom(E_i, G) will have only cohomology in degree 0 and hence f_*Hom(E_i, G) is finite locally free on Spec(A). Moreover, the complex will compute the correct cohomology after tensoring with M. (Observation: you do not need E to be flat over A for this argument to work; the key is that G is flat over A.)

Thirdly, in general, if we can find a perfect complex E’ on X and a map E’ –> E which is a quasi-isomorphism in degrees > -5 (for example), then in order to compute Ext^i(E, G ⊗ M) for i < 4 (or something) we can replace E by E’. This leads us to something like Rf_*Hom(E’, G) which is a perfect complex on Spec(A) by standard arguments. Grothendieck uses this argument to study Ext^0 in EGA III, Cor 7.7.8. Anyhow, this should allow us to handle the case where you have an ample family of invertible sheaves on X (that’s not much better than the projective case of course). [Edit: Jack just emailed that the existence of E’ (in the case of schemes) is in a paper by Lipman and Neeman entitled “QUASI-PERFECT SCHEME-MAPS AND BOUNDEDNESS OF THE TWISTED INVERSE IMAGE FUNCTOR”.]

Fourthly, it may well be that the guess follows from Jack Hall’s paper “Coherence results for algebraic stacks”. It is obviously very close and it may just be a translation, but I haven’t tried to think about it. I’d like to know if this is so. [Edit: Jack just explained to me that this is true for example if the base is of finite type over Z which we can reduce to I think.]

Fifthly, if F is not assumed flat over S, then we should probably do something like look at distinguished triangles

where now E is an object of D(X_A) but G is a usual O_{X_A}-module (placed in degree 0) flat over A and hopefully the obstructions lie in Ext^1(E, G ⊗ I), etc, and we can try imitating the above. This is just pure speculation; I’ll have to check with my friends to see what would be the correct thing to do. Just leave a comment if you know what to do.

Namely, suppose you have X —> S a flat, proper morphism of finite presentation and suppose that F is a finitely presented O_X-module. Then you can consider

where O_X[F] = O_X ⊕ F is the O_X-algebra where F is a square zero ideal. We have a section σ : X —> Y. Then we can consider the closed subscheme Q of Hilb_{Y/S} parametrizing families of closed subschemes of Y which contain σ. If I am not mistaken, then Q = Quot_{F/X/S}.

This only works because we assumed X —> S is proper and flat!

This follows from a result of Jensen which you can find as Theorem 3.2 in Lazard’s paper “Autour de la platitude” which says that a countably presented flat A-module has projective dimension at most 1.

See Lemma 05ME. The key case is where A and B are of finite type over Z.

Challenge: Find a simple proof of Lemma 05ME.

Naively, you might think there is a chance as we only need to reduce the projective dimension from 1 to 0… Of course, it probably is hopeless to find an elementary proof, perhaps even more hopeless than the challenge in the previous blog post.

Let f : X —> B be a morphism of algebraic spaces. Let u : F —> G be a map of quasi-coherent O_X-modules. Consider the functor

Challenge: Give a simple proof of Lemma 083M.

In the case B is affine there is a simple argument that shows: if u_T = 0 for some quasi-compact T over B, then there is a closed subscheme Z ⊂ B such that u_Z = 0 and such that T —> B factors through Z (Lemma 083K). The proof only uses that G is flat over B.

If F is globally generated then you can reduce to the case F = O_X and you can use that Rf_*G is (universally) computed by a perfect complex. This is related to Jack Hall’s paper “Coherence results for algebraic stacks”. Note that Lemma 083M is a consequence of the results there. Jack’s paper uses relative duality which we do not have available in the Stacks project.

If f is projective, you can reduce to the case F = O_X and G such that Rf_*G is universally computed by a finite locally free sheaf, whence the result. This case is straightforward using only standard results.

If the support of G is finite over B then the result is elementary. So you could try to argue by induction on the relative dimension. Alas, I’m having trouble producing enough quotients of G which are flat over B.

I still think something simple might work in general. But I don’t see it. Do you?

Suppose that X is a separated algebraic space of finite type over a ring A. Let W be an affine scheme and let f : W —> X be a surjective \’etale morphism. There exists an integer d such that all geometric fibres of f have ≤ d points. Picking d minimal we get a nonempty open U ⊂ X such that f^{-1}(U) —> U is finite etale of degree d. Let

be the complement of all the diagonals. Choose an open immersion W ⊂ Y with Y projective over A (this is possible as W is of finite type over A). Let

be the scheme theoretic closure of V. We obtain d morphisms g_i : Z —> Y. Then we consider

The image of X’ —> X is closed and contains the open U. Replace X by X ∖ U and W by the complement of the inverse image of U; this decreases the integer d, so we can use induction. In this way we obtain the following weak version of Chow’s lemma: For X separated and of finite type over a ring A there exists a proper surjective morphism X’ —> X with X’ a quasi-projective scheme over A.

But this post is really about the proof of the claim. This claim comes up in the proof of Chow’s lemma in Mumford’s red book as well. I’ve never been able to see clearly why it holds, but now I think I have a good way to think about it.

It suffices to prove that X’ —> X is proper. To do this we may use the valuative criterion for properness. Since V is scheme theoretically dense in X’ it suffices to check liftability to X’ for diagrams

where R is a valuation ring with fraction field K. Note that the top horizontal map is given by d distinct K-valued points w_1, …, w_d of W and in fact this is a complete set of inverse images of the point x in X(K) coming from the diagram. OK, and now, since W —> X is surjective, we can, after possibly replacing R by an extension of valuation rings, lift the morphism Spec(R) —> X to a morphism w : Spec(R) —> W. Then since w_1, …, w_d is a complete collection of inverse images of x we see that w|_{Spec(K)} is equal to one of them, say w_i. Thus we see that we get a diagram