Why is this useful? Well, suppose you want to deform R/I (see this post). It is often easy to see that there are lots of deformations, but what isn’t so easy is to prove that there are any unobstructed deformations. But in the situation above we can just choose a family of matrices A(t) formally depending on an auxiliary parameter t. Then the minors δ_1(t), …, δ_r(t) of A(t) generate an ideal I(t) in R[[t]]. Then R[[t]]/I(t) is a flat deformation of R/I by the criterion from the post on deformation theory: all the relations lift to R[[t]] because the equation (◊) is universal and hence holds also for our matrix A(t).

In fact you can show that any deformation is given by deforming the matrix (by applying the Burch’s theorem which is more general than what I said above to the resolution of the deformed ideal), and hence all deformations are unobstructed and the deformation space of the singularity defined by I is smooth. This in particular shows that the Hilbert scheme of points of a smooth surface is smooth.

The key to the solution to (***) which we formulated here is the construction of a derivation on the Tate resolution of R/I. I am not going to explain this in detail, partly because I do not have a good intuition for why this derivation should exist. So I am only going to give you the flavor of the thing: although the following is correct in spirit it is likely not completely correct in all details (in particular, some of the arguments below should not be done on the level of co/homology but rather on the level of complexes).

Note that if (***) is false, then we obtain a surjective map ξ : Rel —> R/I which annihilates the submodule TrivRel of trivial relations. This in particular implies that Rel/TrivRel = R/I ⊕ (Other part). Because R^{⊕ r} —> R —> R/I —> 0 is the beginning of a minimal resolution we see that we obtain an element e(ξ) ∈ Ext_R^2(R/I, R/I). Cupping with e(ξ) determines an operation

for any module M (in particular M = k or M = R/I). Use Tate’s method to find a free dga with divided powers A which is a resolution of R/I as in the post here. It turns out that the fact that ξ is zero on trivial relations implies that we can represent e(ξ) by a derivation j : A —> A compatible with divided power structure which is homogeneous of degree -2 (this is where Gulliksen whose name I mentioned before comes in). On the other hand, the decomposition Rel/TrivRel = R/I ⊕ (Other part) implies that there exists a nonzero element x in Tor_2(R/I, k) such that δ(x) is nonzero (as an element of k). But this is a contradiction because some divided power of x is zero (as R is regular so finite projective dimension) and on the other hand δ^n(γ_n(x)) = (δ(x))^n is nonzero.

It is really a beautiful trick (apparently due to Gulliksen) to play off against each other the derivation pushing things down in degree and the divided power structure to go back up into the area where the Tors are zero.

But more is true. Namely, recall from this post that with these choices we obtain an obstruction map

(unfortunately the notation between these two posts isn’t compatible) where Rel is the module of relations between the f_1, …, f_r in S/m_RS. Now because J ⊂ m_S we can compose Ob with the canonical map S/(JS + m_R S) —> k to get a reduced map

At this point an argument along the lines of the argument in the first paragraph shows that (**) is injective if this reduced obstruction map is zero (in fact I think it is equivalent, but I didn’t check this).

Having arrived at this point we see that it suffices to prove the following (changing back to the notation in the post on deformation theory):

It turns out that this result is contained in a paper by Vasconcelos and with a little bit more detail on the proof it is Lemma 2 in this paper by Rodicio. The key appears to be the technique of Tate to find divided power dga resolutions of R/I combined with a technique for constructing derivations on dgas which is due to Gulliksen. We will return to this in a future post.

Let A —> B be a flat local homomorphism of Noetherian local rings. By the local criterion for flatness this also implies that the map on completions A* —> B* is flat. Hence, in order to prove Avramov’s theorem that I mentioned here it suffices to prove it for a flat map of Noetherian complete local rings.

Let A be a complete local Noetherian ring. Write, using the Cohen structure theorem, A = S/I where S is a regular complete local ring. The complete intersection defect of A is the nonnegative integer

where k = S/m is the residue field of S. Note that dim_k(I/mI) is the minimal number of generators of the ideal I. Since S is regular we see that A is a complete intersection if and only if cid(A) = 0.

Next, let A —> B be a flat local homomorphism of complete local Noetherian rings. Avramov proved, among other things, that

in this situation. It is clear that this proves the result we mentioned in the previous post.

OK, now why is (**) injective? I claim that this is a question about the obstruction space for the deformation theory of the algebra B/m_AB over k. I will discuss this in the next post.

Suppose that A is an Artinian local ring with residue field k. Set R_A = A[x_1, …, x_n]. An embedded deformation of R/I over A is an ideal I_A ⊂ R_A such that I_A \otimes_A k = I and such that R_A/I_A is flat over A. It turns out that this is equivalent to the following:

If you’ve ever tried to compute the deformation space of a singularity then you’ve seen this. In particular, if A = k[ε] is the ring of dual numbers, then f_i’ = f_i + ε h_i and condition 2 implies that f_i → h_i defines a map from I to R/I. Thus the tangent space to this deformation functor is

Note that this is typically an infinite dimensional space (except if R/I is Artinian), which make sense because we are doing embedded deformations. To get the first order deformation space of R/I as a singularity we can divide out by the module of derivations of R over k, but for this blog post we prefer not to do so.

Next, I want to consider the obstruction space to our given deformation problem. Suppose that we have a small extension A —> B of Artinian local rings with kernel K. Suppose that f’_1, …, f’_r is a bunch of elements of R_A whose images in R_B do define an embedded deformation. To see if f’_1, …, f’_r is also a deformation we need to check if relations G = (g_1, …, g_r) ∈ Rel lift to relations among the f’_1, …, f’_r. By the assumption that we have a deformation over B we know that we can pick (g’_1, …, g’_r) such that ∑ g’_i f’_i is an element Ob(G) of KR_A = R \otimes_k K. Picking different choices of g’_i changes Ob(G) by an element of KI. Hence the obstruction is a well defined map

Note that the trivial relations f_if_j = f_jf_i of course do lift to relations among the f’_i. Hence we see that the obstruction map is an element of

where TrivRel ⊂ Rel is the module of trivial relations. However, the obstruction map above depends on the initial choice of lifts f’_i to elements of R_A (with more or less given images in R_B as we’re given the deformation over B). Altering the choice of these f’_i modifies Ob by an element of Hom_R(R^{oplus r}, R/I) \otimes_k K. Combining all of the above we see that

Again this is usually an infinite dimensional vector space over k.

I’m going to try and say something intelligent about this obstruction space in a future blog post. But for the moment I just make the comment that Rel/TrivRel is equal to the first Koszul homology group for the ring R and the sequence of elements f_1, …, f_r.

Let R be a Noetherian ring and let I, J be ideals of R. Then Tor^R_*(R/I, R/J) is a differential graded algebra (with zero differential). How does one get this algebra structure?

In a paper published in 1957, John Tate came up with the following strategy: Try to find a strictly commutative differential graded R-algebra A endowed with divided powers (as in this post) together with a given augmentation ε : A —> R/I such that

The first condition means that A is quasi-isomorphic to R/I as a dga (with divided powers) and the second implies that A is a free resolution of R/I as an R-module. Hence we see that Tor_*(R/I, R/J) is the homology of A \otimes_R R/J = A/JA which is a dga with divided powers.

Tate shows that you can construct such dga resolutions of R/I by successively adjoining variables to kill cycles; starting with the Koszul complex for a set of generators of I. In the book by Gulliksen and Levin it is checked that the dga which Tate gets is endowed with divided powers.

And of course, in the situation of Tate’s construction above, we have that A/JA is the quotient of a dga acyclic in positive degrees!

with the differential. Then H(A) is a strictly commutative differential graded algebra endowed with divided powers, right?

Wrong! Can you spot the mistake?

Are you attending the conference Moduli Spaces and Moduli Stacks in May? Or will you come by Columbia University in the next few months? If so, then you can order a Stacks Project T-shirt and pick it up here at the math department. 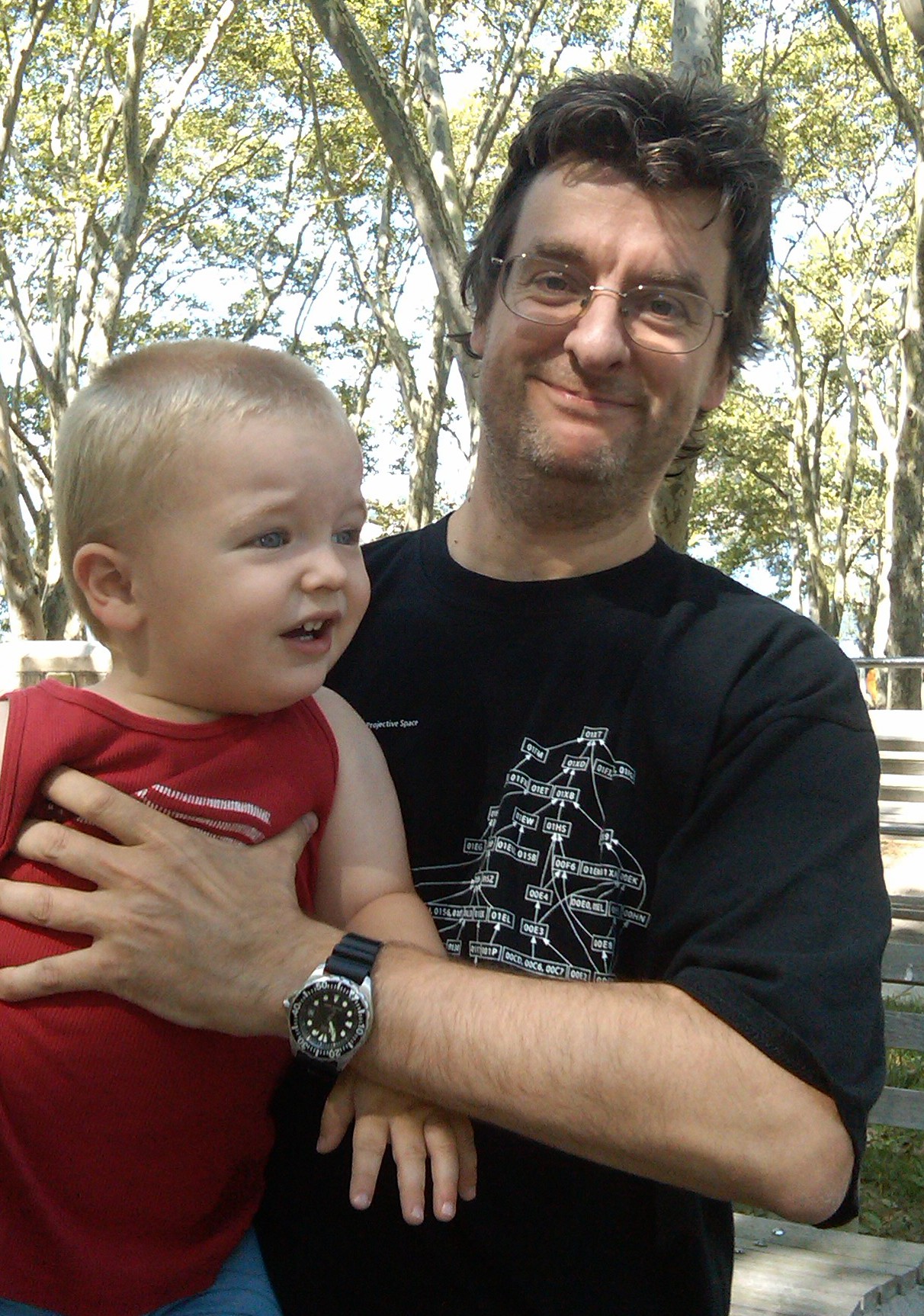 The picture shows me wearing the T-shirt; on the back it has “The Stacks Project” in white letters. Since I am trying to avoid spam orders, I will not put a link to the order form here, but I suggest you follow the link to the moduli conference above to find the link over there.

Let (X, O_X) be a scheme. Let tau = fppf, syntomic, etale, smooth, or Zariski. The site (Sch/X)_{tau} is a ringed site with sheaf of rings O. The category of quasi-coherent O_X-modules on X is equivalent to the category of quasi-coherent O-modules on(Sch/X)_{tau}, see Proposition Tag 03DX. This equivalence is compatible with pullback, but in general not with pushforward, see Proposition Tag 03LC.

Let me explain this last point a bit. Suppose  f : X —> Y is a quasi-compact and quasi-separated morphism of schemes. Denote f_{big} the morphism of big tau sites. Let F be a quasi-coherent O_X-module on X. The corresponding quasi-coherent O-module F^a on (Sch/X)_{tau} is given by the rule F^a(U) = Γ(U, φ^*F) if φ : U —> X is an object of (Sch/X)_{tau}. In general, for a sheaf G on (Sch/X)_{tau} we have f_{big, *}G(V) = G(V \times_Y X). Hence we see that the restriction of f_{big, *}F^a to V_{Zar} is given by the (usual) pushforward via the projection V \times_Y X —> V of the (usual) pullback of F to V \times_Y X via the other projection. It follows from the description of quasi-coherent sheaves on (Sch/Y)_{tau} as associated to usual quasi-coherent sheaves on Y that f_{big, *}F^a is quasi-coherent on (Sch/Y)_{tau} if and only if formation of f_*F commutes with arbitrary base change. This is simply not the case, even for morphisms of varieties, etc.

Can anybody suggest a better name for these sheaves?