Guess what? The most used lemma in the Stacks project is currently Nakayama’s lemma with 73 references. Then there is a gap for a while. The next most highly cited lemmas are:

I guess it makes sense that the first few of these would be results that we consider to be part of the language, and somehow not really results at all (if that makes sense).

Can you, dear reader, send me (or post in comments) an example of a Noetherian ring A and finite A-modules M, N such that the canonical map

is not an isomorphism in D(A)? Much obliged.

Update Jan 27, 2013. Bhargav emailed me the following observation. Any mistakes are mine.

Lemma If A has a dualizing complex ω and the map is an isomorphism for every M, N then A has to be Gorenstein.

Proof. Denote the map above f_{M, N}. Then f_{M, N} is also an isomorphism for any M, N \in D^b_{Coh}(A) by triangles. Now choose M = N = ω. Then RHom(ω, ω) = A, so ω is invertible for the derived tensor product. This forces ω to be (locally) the shift of an invertible module by the following lemma. End.

Proof. Observe that K can be represented by a bounded above complex K^* of finite free A-modules all of whose differentials are zero modulo the maximal ideal m_A of A. Let k be the residue field of A. We have

The lemma is clear for D(k) as this is the category of graded k-vector spaces. We conclude that K ⊗^L_A k which is represented by K^* ⊗_A k is isomorphic to k[a] for some integer a. Thus we conclude that K^{-a} = A and K^n = 0 for other n as desired. End.

The conclusion from the comments below is that the ring of dual numbers k[\epsilon] does satisfy the property that f_{M, N} is an isomorphism for all M, N finite. [This is wrong! See update below.] This is a Gorenstein ring so there is no contradiction. On the other hand the ring R = k[x, y, w]/(x^2, y^2, xw – yw, w^2) does not satisfy the property, which now also follows from Bhargav’s observation as this ring isn’t Gorenstein (the socle has dimension 2).

Update Jan 29, 2013. Actually, Bhargav send me the following update. As usual any and all mistakes are mine.

Lemma If the map is an isomorphism for all finite M,N, then A is regular.

Proof. A is Gorenstein as before, so A has finite injective dimension. Hence, RHom(M,A) is a finite A-complex for any M. Then RHom(M,A) (x) N is bounded above (being the derived tensor product of two bounded above A-complexes). On the other hand, the right hand side is not bounded above if A is not regular. For example if A is local with residue field k, we could take M = N = k, in which case Ext^i_A(k,k) is non-zero for arbitrarily large i (as the minimal free resolution does not terminate). End.

In particular, this shows that the map is not an isomorphism for A = k[x]/(x^2), and M = N = k. This contradict the discussion above in the comments. The mistake I (and I think also Ben) made is that in computing the LHS for A = k[ε] = k[x]/(x^2), and M = N = k I took a free resolution of k over k[ε], then I took the dual of this complex and used it to compute the left hand side. But a complex of free A-modules isn’t K-flat so can’t be used to compute the derived tensor product… Argh!

Apologies for all the confusion!

Some plots from statistics gathered by the new Stacks project website. The first 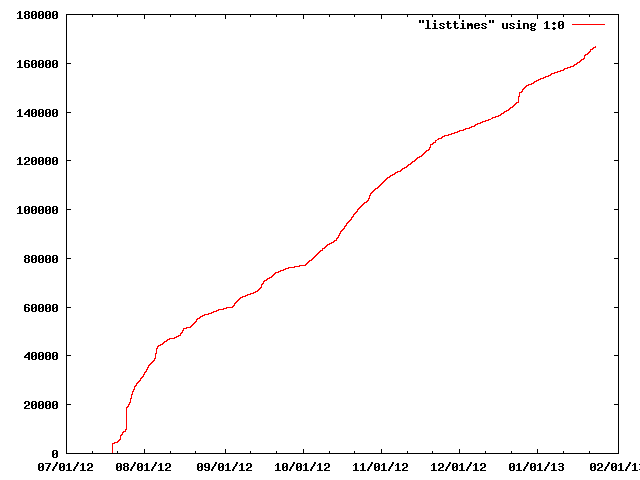 shows the number of times the google bot has been checking in over time (in total about 160000 times). The second 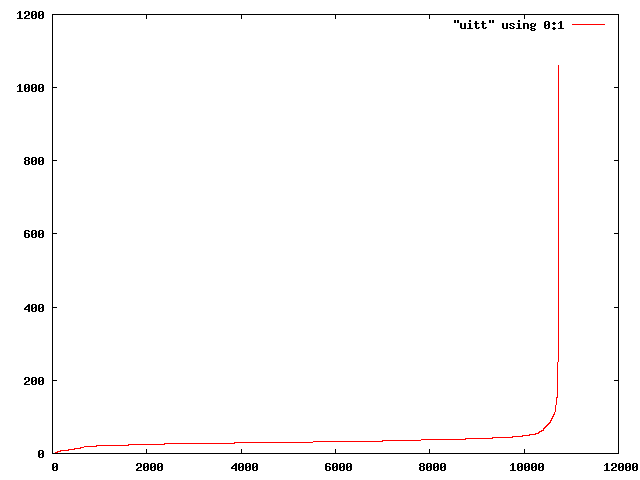 shows the cumulative count of tags looked up in the stacks project. This plot is a bit misleading. Precisely, there are

Unfortunately these numbers include hits from robots (mostly search engines). The most looked up tags are:

For some of these there doesn’t seem to be a good reason for them to be looked up more and so there must be some other reason why these get hit (i.e., the tag in question refers to something in “real” life).

In this post I try to come to grips with what Jason was trying to say to me in the comment on this post and in an email he sent me.

So we have currently enough background material built up in the Stacks project to start discussing an application of Artin’s axioms to a particular moduli problem. I plan to use the Quot functor as the first example. We discussed this in the blog post above, but not in complete generality. Jason’s suggestion addresses the issue of how to deal with the most general case (in some sense).

Setup: S is a Noetherian scheme, f : X —> S is a morphism of an algebraic space to S which is locally of finite type, and F is a finite type O_X-module. The Quot functor associates to a scheme T over S the set of quotients

which are of finite presentation as O_{X_T}-modules, have support proper over T, and are flat over T. Here X_T is the base change of X to T and F_T is the pullback of F to X_T.

I first discuss two cases where I believe I know exactly what to do. But… I haven’t worked out all the details so I could still be wrong.

Case II: X is flat over S. In this case the suggestion in the fifth remark of the post works. In other words, given a quotient F_A —> Q we choose a distinguished triangle

where F ⊗^L A means the derived pullback of F to X_A. In this case the obstruction group is still Ext^1_{O_{X_A}}(E, Q ⊗ I) except that the extension group is computed in the derived category of O_{X_A}-modules.

Case III: general. The trick used in Case II does not work anymore. A naive explanation of the problem is that to get the obstruction class one uses a distinguished triangle

Of course, we can try to approximate derived algebraic spaces. One remark is that if there exists a closed immersion i : X —> Y with Y an algebraic space of finite type and flat over S, then we can simply work with i_*F on Y. In general I do not know how to construct such an embedding. Locally we can, and we can try to use a Cech cover approach, but I don’t know how to make this work. Another idea (closer to Jason’s suggestion) is to choose a sheaf of flat f^{-1}O_S-algebras P on X and a surjection P —> O_X. Then we can try to work in the category of P-modules, etc. Finally, we can go whole hog and find a simplicial resolution of O_X by flat f^{-1}O_S-algebras and use that.

However, in each of these approaches the end product is an extension group on a derived object, let’s call it Y_A. Now, we are going to enter the realm of pure speculation (if we haven’t done so already — maybe all of this is a fictional reality — I can say that here since nobody has read this far into the post — have you?). Say we are looking at Ext^1_{Y_A}(E, Q ⊗ I). It seems quite likely to me that RHom_{O_{Y_A}}(E, Q ⊗ I) is a well defined object of D(O_{X_A}). Thus there still is a chance that we can define this gadget using non-derived methods and make things work in that way…

What do you think?

where i_A : X_A —> Y_A is the embedding of the usual base change of X into the base change of any of our approximations Y of X as above. So actually the thing we should use on X isn’t E but Li_A^*E! And again there is a chance we can construct Li_A^*E using non-derived methods. This could be quite useful to the overall strategy. I’ll think more.]

Of course the bibliography isn’t perfect and we’ll work on that. Moreover, I think we could sprinkle more references throughout the text. Please don’t hesitate to send in motivated suggestions for citations (even to your own papers) to stacks.project@gmail.com.

Yesterday, on the last day of 2012, I finished writing some material on the existence of approximations by perfect complexes on algebraic spaces which I committed to the project on the first day of 2013, i.e., today. This covers the results necessary to proceed with the strategy described here to apply Artin’s axioms to the existence of Quot spaces. As mentioned there, the approximation result (in the case of schemes) can be found in the paper “Quasi-perfect scheme-maps and boundedness of the twisted inverse image functor” by Lipman and Neeman. Thanks to Jack Hall for pointing out the reference.

It turns out that there is an induction principle for quasi-compact and quasi-separated algebraic spaces which I missed formulating clearly and using in writing the material in the chapter on cohomology of sheaves on algebraic spaces. For example, in order to prove one has finite cohomological dimension for quasi-coherent sheaves on quasi-compact and quasi-separated algebraic spaces, we introduced (with help from Bhargav Bhatt) the alternating Cech complex and used that. However, it may makes sense to revise and replace this by an application of the induction principle. On the other hand, I think that carefully applying the alternating Cech complex, you can sometimes prove more (i.e., you can get explicit bounds which I do not see how to get otherwise and which may even be interesting in the case of schemes). I hope to return to this sometime in the future.