The last few months have not been helpful for my sanity (and I think for that of a large number of other Americans). My three-point program to return to better mental health is to:

On the question everyone is asking themselves (what will Trump do?) I have no idea and suspect he doesn’t either. Many around him and in the Republican party do have definite ideas about this. Their agenda will be to use their party’s unparalleled control of the US government at all levels, together with his executive power, to force changes dictated by their ideology. Either Trump will go along with this, or he’ll change and come up with his own agenda going beyond just that of getting more attention for himself.

On the question of how we got here, I think my previous blog post stands up well given what data I’ve seen from the election returns. Most of the explanations one hears of Trump’s success don’t hold up if you look at exit polling numbers:

There is however a common thread in most stories I’ve read that let Trump supporters say why they were voting for him: they hated Hillary Clinton and found her dishonest. Polls show that back in early September, when asked “who is more honest and trustworthy?” Clinton and Trump were tied (45/45). By the week before the election, the numbers were (38/45): eight percent more of likely voters thought Trump was honest than thought Clinton was. Whatever you think of Hillary Clinton, the idea that Donald Trump is more honest is quite simply insane. The central question of how we got to a Trump presidency is to understand how this destruction of Clinton’s reputation was accomplished. What makes this tricky is that there was such a huge campaign from all sides to do this, including not just the usual Republican politics of personal destruction machine (Drudge Report, Breitbart, Fox News), but a wide array of actors on the center and the left, including:

Together with the onslaught of right-wing “News” attacking Clinton’s honesty, it is not surprising that more voters decided Trump was the honest one, or that this likely was enough to get him elected (with a minority of the popular vote).

One way to describe what has happened is that this was the first real social media election, with most people getting the information they used to decide who to vote for from Facebook and other internet sources. Many if not most of these have no interest in what is actually true. Many are dominated by a reality TV ethos of picking out someone for others to attack, appealing directly to the ugliest part of the monkey brain we are all descended from. This is not just the province of the Right, with the Left just as happy to join in the ugliness. Everyone can play and get satisfaction of their darkest needs. The winner will always be the con artist monkey with the best dominance displays.

Trump was always going to win an election campaign fought on these grounds, and that’s what this one was. I have no idea of how to stop this from being the future of US democracy. If you’re not from the US, maybe you can take action to ensure that your society does not follow ours down this path. 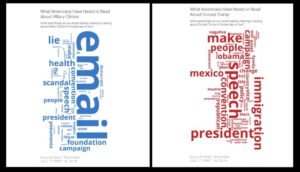 Update: I’m not seeing many other analyses of what happened this election that I agree with. Here’s one.

This entry was posted in Favorite Old Posts, Uncategorized. Bookmark the permalink.