The explanation for the lack of blogging here the past month is mostly that I haven’t seen any news worth blogging about. It took only a little bit of self-control to not do things like make snarky comments about recent conferences on string theory and quantum gravity.

Today I noticed a discussion on Twitter of the perennial question about what “spin” means in quantum theory, with some of the tweets included this highly appropriate meme: 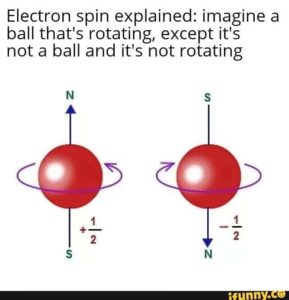 I thought it might be worth while to make a stab at explaining what “spin” really is. For a much more detailed version, I wrote a book. But this post is much shorter…

Picking a particular point and a particular direction (say the z-direction), the angular momentum $J_z$ is defined to be the “generator” of rotations about that point, around the z-axis. This means that when you do such a rotation by an angle $\theta$, for any observable (function of position and momentum) $F$
$$\frac{dF}{d\theta}|_{\theta=0}=\{F, J_z\}$$
where the bracket is the Poisson bracket. A short calculation shows
$$J_z=r_xp_y-r_yp_x$$
which is often given as the definition. $J_z$ is itself an observable, which you can say is the angular momentum about the z-axis of a point particle with x,y coordinates of its position and momentum given by $r_x,r_y,p_x,p_y$. In classical physics $J_z$ can take on any values.

In quantum mechanics, observables are operators acting on states, and $J_z$ becomes the operator $\widehat{J}_z$ which (with an additional factor of $-i$ to get unitary transformations) generates rotations on states. This means (using units such that $\hbar=1$)
$$\frac{d}{d\theta}\ket{\psi(\theta)}=-i\widehat J_z \ket{\psi(\theta)}$$
You can solve this differential equation and see that if you rotate a state by an angle $\theta$ about the $z$ axis, you get
$$\ket{\psi(\theta)}=e^{-i{\widehat J}_z\theta}\ket{\psi(0)}$$
States that are eigenvectors of ${\widehat J}_z$ are supposed to be the ones with a well-defined value of the classical observable $J_z$, given by the eigenvalue.

One finds experimentally that the observed values of $J_z$ are given by
$$\frac{n}{2}$$
Unlike the classical case, as expected this number is quantized (that’s why they call it quantum mechanics…), but the factor of $2$ is unexpected. Since a rotation by $2\pi$ should bring the state back to itself, one expects that
$$e^{-iJ_z2\pi}=1$$
so $J_z$ should be an integer. If one finds a state with $J_z=\frac{1}{2}$, rotating it by an angle $2\pi$ changes its sign. This is weird, but the sign of a state isn’t itself something you can measure.

Looking more closely at the operator $\widehat{J}_z$ for quantum systems, one finds that for some states it has exactly the same relation to position and momentum as in classical physics
$$\widehat{J}_z=\widehat{r}_x\widehat{p}_y-\widehat{r}_y\widehat{p}_x$$
When states are given by a wavefunction depending on spatial coordinates, one can show that this is just the expected action by infinitesimal rotation of the spatial coordinates. In this case rotation by $2\pi$ doesn’t change the state, and $J_z$ has integral (not half-integral) values.

For many quantum systems though, there is an extra term:
$$\widehat{J}_z=\widehat{r}_x\widehat{p}_y-\widehat{r}_y\widehat{p}_x+\widehat{S}_z$$
and it is this extra term $\widehat {S}_z$ that is the “spin” observable. When states are given by wavefunctions, what the equation above is telling you is that when you act on a state by a rotation, you get not just the expected induced action from the rotation on spatial coordinates, but also an extra term. A natural guess is that, as in the meme, a point particle is really a ball of some new stuff, with $\widehat {S}_z$ the effective extra term caused by the positions and momenta of the new stuff.

For an elementary particle such as an electron, experimentally one finds that $\widehat S_z$ has eigenvalues $\pm 1/2$, which explains why one sees half-integral quantization. As the meme says, there is no viable physical model of rotating stuff that would give this result. Something very different is going on.

So far I’ve stuck to talking about rotations about the z-axis, but one also should consider rotations about other axes. The problem is that more sophisticated mathematics is needed, since the generators of rotations around different axes don’t commute (doing the rotations in the opposite order gives a different result). The mathematics needed is that of the representation theory of the rotation group $SO(3)$ and its double-cover $SU(2)$. From this representation theory one learns that the only consistent possibilities are given by putting together copies of a “spin n/2” representation for $n=0,1,2,\cdots$. These are $n+1$-dimensional vector spaces, on which $\widehat{S}_z$ acts with eigenvalues
$$\frac{-n}{2}, \frac{-n +2}{2},\cdots,\frac{n-2}{2},\frac{n}{2}$$
The case $n=0$ is that of $\widehat{S}_z=0$, and the simplest non-trivial case is the $n=1$ case which gives $\widehat{S}_z$ for the electron.

So, the “spin 1/2” characteristic of the electron is something completely new, unrelated to anything in classical mechanics. If you describe the electron by a wavefunction, it will take values not in the complex numbers, but in pairs of complex numbers, with rotations acting on the pairs by the spin-1/2 representation (also known as the “spinor” representation). Besides the non-classical physical behavior, the geometry is also non-classical, with the spinor representation something that cannot be described by the usual formalism of vectors and tensors.

Another reason I haven’t been writing much on the blog this past month is that I’ve been working on writing up something about twistors. I’ll write about twistors in detail here when this is done, but one thing they do is give a picture of space-time geometry in which spinors are fundamental, not vectors. A fundamental idea of twistor theory is that a point in space-time is a complex two-plane inside complex four-space. In twistor theory the answer to the question of where the spinor degree of freedom at a point comes from is tautological: the two complex dimensional spinor degree of freedom at a point IS the point.

Bonus link for those who have gotten this far. A presentation by CERN director Fabiola Gianotti, which comes off a bit differently than news reports saying CERN is going ahead with FCC. On page 5

This entry was posted in Uncategorized. Bookmark the permalink.