Hype about string theory and fundamental physics seemed to have been dying down recently, with only three editions here so far in 2019 of This Week’s Hype. Today however brings a bumper crop of the highest quality, with new examples from a few of the world’s most prominent theoretical physicists. Today’s hype neatly exemplifies the two main current genres of hype about string theory and supposed new fundamental physics. The first is the old-school genre of string theory hype we’ve now been seeing for 35 years: “string theory makes a testable prediction” (no, it doesn’t). The second is the new, post-modern variety: no actual theory, just a grandiose claim that space and time have been replaced, although it’s unclear by what.

The problems with this include:

In his conclusion, Vafa writes:

In the next 5–10 years, we may know, for example, whether dark energy is constant or not. If it is, that could pose a serious blow to string theory. But if dark energy is found to be changing, could that observation be the first experimental evidence for ideas emanating from string theory?

The most likely possibility over the next 5-10 years is that measurements continue to be compatible with constant dark energy. I don’t believe for a minute that 10 years from now after that result is in you will see Vafa or anyone else giving up on string theory or even admitting it has suffered a “serious blow”. On the other hand, if there is any evidence for a varying dark energy, Vafa or others will surely claim it as “evidence for string theory”, which it will not actually be.

Over the last 15 years I’ve often written here about this “Swampland philosophy”, which never made much sense to me. I didn’t understand back in 2005 and still don’t understand now why conjectures that behavior you don’t observe in the real world might be inconsistent with some other conjectures about an unknown M-theory are supposed to be of interest. The sociological motivation here is rather clear though: the KKLT-based “anthropic landscape” philosophy has not worked out well for the field, and the hope is to disentangle the subject from that morass. A good explanation of what is going on is provided by this (stolen from Will Kinney, who also has a lot to say about the whole swampland business): 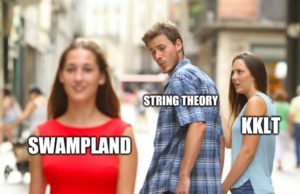 Cosmic Triangles Open a Window to the Origin of Time

This is a different sort of hype, with no direct relation to string theory. In this genre of hype, you don’t have any connection between your calculation and either experiment or a fundamental theory, but this doesn’t stop you from making grandiose claims. What’s behind this particular article is this paper, which develops a nice calculational method exploiting conformal symmetry. What’s not made clear in the Quanta article is that this has no connection to anything measurable. As the authors of the article explain:

In this paper, we have worked under the lamppost of weakly broken conformal symmetry. This has allowed us to derive particularly clean insights into the analytic structure of inflationary correlators. However, it also restricts the strength of the couplings between the inflaton and additional massive fields. This makes the observational challenge to detect these effects enormous.

In other words, this is about speculative models in which the observable effects described at length in the Quanta article would be unmeasurably small.

The post-modern hype come into play with the argument that these conformal-symmetry based calculations somehow tell us how to replace space and time.

This suggests that the temporal version of the cosmological origin story may be an illusion. Time can be seen as an “emergent” dimension, a kind of hologram springing from the universe’s spatial correlations, which themselves seem to come from basic symmetries. In short, the approach has the potential to help explain why time began, and why it might end. As Arkani-Hamed put it, “The thing that we’re bootstrapping is time itself.”

If you’re trying to understand the origin of this particular dollop of hype, it’s a good idea to keep in mind something Arkani-Hamed said at a talk about Lance Dixon’s work back in 2013:

… I AM an ideologue. In my defense at least I can say that I’m a serial ideologue, in the sense that I’ll take totally different ideologies and drop the last one without thinking about it, but it’s very important for me personally to be an ideologue when I’m working on something…
So, usually I’ll get up when I talk about scattering amplitudes and give a long introduction about how spacetime is doomed, we have to find some way of thinking about quantum field theory without local evolution in space time and maybe even without a Hilbert space and blah-blah-blah. This is all very high-falutin stuff, this is stuff that Lance wouldn’t be get caught dead saying. I think none of these guys would ever say something that sounds so pretentious, but I have to say it, you know I have to say it, because this is the only way I can get up in the morning, and like “I suck again, OK, here we go, I’m doing it because spacetime is doomed, I swear to God, right”.

I’m actually rather sympathetic to the “bootstrap” philosophy in some general sense, which I’d interpret as “all is unitary representation theory of the conformal group”, i.e. that constraints of conformal symmetry, analyticity and unitarity are almost enough to determine a fundamental theory. The 1960s version of this, trying to get strong interaction physics purely from such general principles, didn’t work out, but I’ve become more and more convinced that representation theory and fundamental quantum field theory are very deeply intertwined. I do think though that to get anywhere you’re going to need to either work top-down (i.e have an actual fundamental theory and derive its implications) or bottom up (i.e. use observations to find the route to better theory).

Will head out soon for a short vacation in Northern California (if it hasn’t burned to the ground). I had thought about stopping by the 2020 Breakthrough Prize Symposium, but decided listening to talks about why supersymmetry/supergravity got a $3 million award would not be good for my blood pressure.

Update: Those interested in KKLT vs. Swampland debates might be interested in the latest from Tom Banks. He makes a detailed case against KKLT/eternal inflation/Landscape models, which string theory Swampland enthusiasts may find appealing. They should however note what he has to say about string theory itself:

A more sensible attitude, which I share, is to accept that string theory defines some models of quantum gravity, but obviously not the one that corresponds to the real world.

This entry was posted in Swampland, This Week's Hype. Bookmark the permalink.