I’ve spent most of the last month traveling, first to Latvia and Russia, then to China, finally to Seattle. Back now, looking forward to staying in one time zone and not seeing the interior of a plane for a while.

In China I visited Shanghai, Suzhou, Hangzhou, Yellow Mountain, Hong Kong and Macao, all of which was an amazing experience (thanks to John Baez for, among other things, urging me to search out the few remaining sections of old Shanghai). The weather unfortunately was less than ideal, with record heat in Shanghai, rain at Yellow Mountain, and clouds the day of the eclipse. Still, it was a lot of fun to be in People’s Square and see the city go dark for 6 minutes. Here’s one view from about that moment: 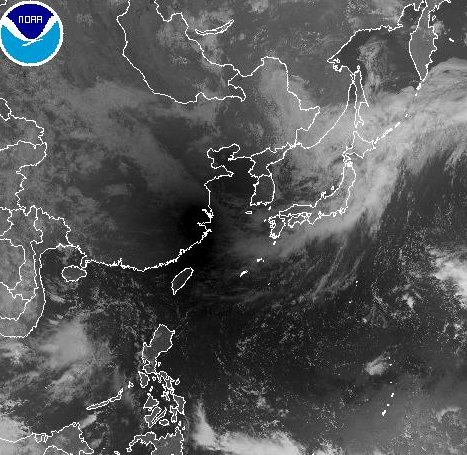 After getting back to New York from China, I turned around and went out to Seattle to attend my friend Nathan Myhrvold’s surprise 50th birthday party. This was held at the new lab of his company, Intellectual Ventures, and among the organizers were Bill Gates and Lowell Wood. In attendance were many of the luminaries of the technology and culinary worlds, with Wylie Dufresne of New York’s WD-50 one of several chefs who came in to attend the party and serve amazing food to the guests. Not the sort of party I normally attend…

Regular blogging will resume imminently. Things seem to have been rather quiet the past couple weeks anyway. The news of delays at the LHC reported here earlier has been getting more media attention. There’s a very good article about the LHC problems by Adrian Cho at Science here, and the New York Times ran a front-page story yesterday. For some reason, the Times decided that it was important to quote what prominent theorists have to say about this, including:

“I’ve waited 15 years,” said Nima Arkani-Hamed, a leading particle theorist at the Institute for Advanced Study in Princeton. “I want it to get up running. We can’t tolerate another disaster. It has to run smoothly from now.”

Gordon Watts has some comments about this here (including pointing out that “running smoothly from now” is probably not in the cards), and there’s also a good posting at Resonaances.

My understanding is that the LMC (LHC Machine Committee) was meeting today to go over all that is known about the splices problem and discuss the question of what the highest energy is at which the machine can safely run in its current state. A smaller group of people, in consultation with the experiments and the director, will then have to decide either to run at that energy, or accept further delays for repairs to allow running at a higher energy. It’s not known how long that decision will take, but presumably it will come soon. If no further repairs are to be made, the current schedule has the machine ready for injection of a beam in mid-November.

This entry was posted in Experimental HEP News, Uncategorized. Bookmark the permalink.